Volunteering to take on power: Experimental evidence from matrilineal and patriarchal societies in India 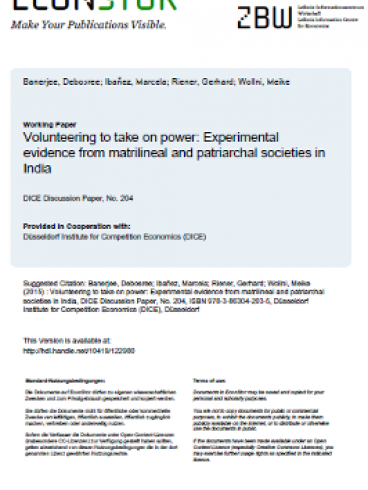 Volunteering to take on power: Experimental evidence from matrilineal and patriarchal societies in India

The results show that power differences are due to conformity with preassigned gender roles in both matrilineal and patriarchal cultures. Women in matrilineal society (where ancestral descent is traced using maternal lines), were found to be more willing to assume the role of the norm enforcer. The converse is true in patriarchal society, where men dominate and hold power. The results also suggest exposure to public scrutiny and aversion to retaliation as drivers of gender differences in the willingness to volunteer in positions of power. It also found that changes in the institutional environment associated with less exposure of and retaliation against the norm enforcer increased participation of the segregated gender.

The paper recommends governments and policymakers consider the underlying cultural context to make the adjustments needed to ensure volunteering programmes contribute to gender equity, rather than reinforcing unequal power dynamics.

Report
Activating the Role of Women in Volunteering
END_OF_DOCUMENT_TOKEN_TO_BE_REPLACED