Volunteering Among Older People in Korea 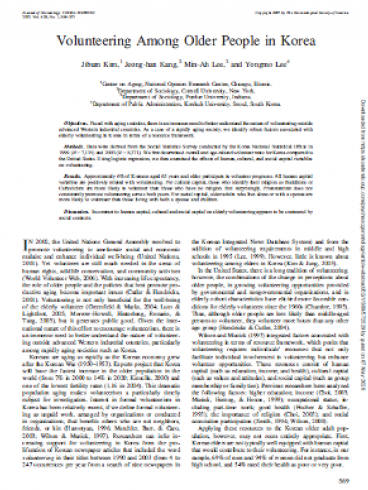 Volunteering Among Older People in Korea

The results show that around 6 per cent of Koreans 65 years of age or older participate in volunteering programmes, a much lower percentage than the same age group in the United States. All human capital variables were positively related to volunteering, which is consistent with similar findings from the United States. For example, elderly people who are better educated, healthier and live in a household owned by a relative were found to be more likely to volunteer. Regarding cultural capital, those who identified as Buddhist or Catholic are more likely to volunteer than individuals with no religious affiliation. Regarding social capital, elderly people who live alone or only with their spouse were more likely to volunteer than those living with both a spouse and children.

This study provides useful insights and recommendations for governments and policymakers to broaden spaces for volunteering in Korea in which elderly people are effectively engaged.

Report
Activating the Role of Women in Volunteering
END_OF_DOCUMENT_TOKEN_TO_BE_REPLACED