Volunteering in the world of work in Ecuador 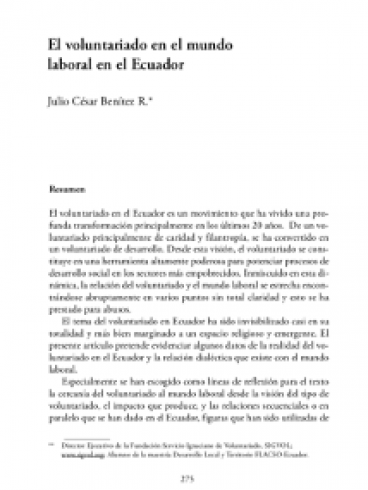 Volunteering in the world of work in Ecuador

The paper determined the scale of volunteering in Ecuador based on the results of a national survey in 2007. The survey found that at least 100,000 people volunteer in Ecuador every year, contributing around 22.5 million hours of work. The types of volunteer work range from delivering basic services to assisting in development and social projects. The paper estimates that the economic value of volunteers was around 0.46 per cent of the country’s GDP for 2006. In addition to its economic value, the paper also argues that volunteering is important on account of its distinctive contributions to the overall development of society. It notes that volunteers help enhance human connections, solidarity, participation and social integration in their society. Volunteering also helps them build skills and networks that are useful for entering the labour market. The paper also found that in some cases volunteers are being exploited and regarded as “cheap labour”.

The study provides policymakers and other actors with insights on the social and economic contribution of volunteering. It stresses that volunteering is most effective if incorporated into national and local development plans, not only as a mechanism to generate social productivity but also as a means to drive human and social transformation. Finally, it recommends that policymakers and other actors value volunteers for their distinctive contributions and cautions against using volunteering as “cheap labour”.

Report
Activating the Role of Women in Volunteering
END_OF_DOCUMENT_TOKEN_TO_BE_REPLACED