Technical paper
On the design of volunteer programmes to facilitate the…

Volunteering to accelerate development: concepts and… 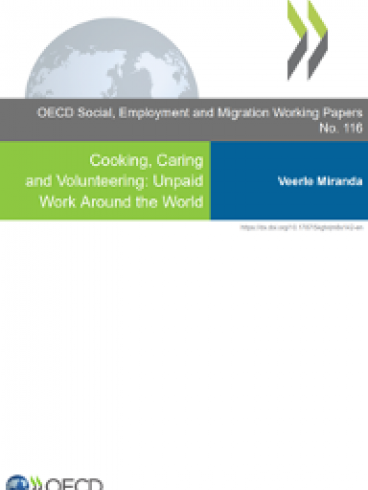 Cooking, Caring and Volunteering: Unpaid Work Around the World

The paper shows that unpaid work, largely dominated by cooking, cleaning and caring, makes a significant contribution to social well-being, although the ways in which it does so differ between countries and between men and women. The paper found that unpaid work contributes not only to current household consumption (for example, cooking) but also to future well-being (for example, parental investment in raising children) and community well-being (for example, voluntary work). The findings also suggest that between one-third and half of all valuable economic activity in the surveyed countries is not accounted for by traditional measures of well-being, such as GDP per capita. The paper also found that in all OECD countries, women do more of this work than men, although this is balanced to a certain extent, which varies by country, by the fact that women do less paid work. While unpaid work (especially the gender division of unpaid work) is to some extent related to a country’s development level, country cross-sectional data suggest that demographic factors and public policies tend to exercise a much larger impact.

The paper provides government agencies and policymakers with new evidence and recommendations on how to monitor and design gender-sensitive public policies that support unpaid work and give a more balanced view of well-being across different societies. The paper also recommends policymakers interested in the efficiency and equity of social policies use time use surveys to better understand the value of unpaid work.

Report
Activating the Role of Women in Volunteering
END_OF_DOCUMENT_TOKEN_TO_BE_REPLACED