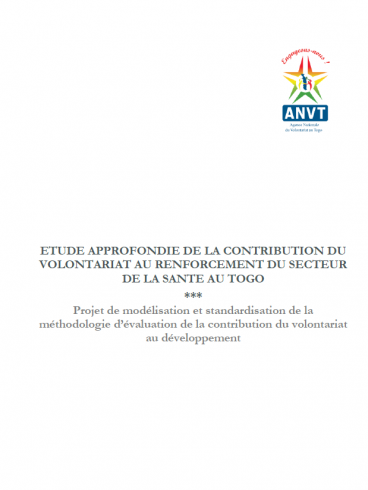 Having participated in Phase I of the UNV Innovation Challenge on measuring volunteer contributions to the achievement of the Sustainable Development Goals, the National Volunteering Agency of Togo (Agende Nationale du Volontariat au Togo - ANVT) was selected to participate in Phase II to measure the contributions of volunteers to strengthening the national health system.

This study report summarizes the findings in French.

As part of Phase II of the UNV Innovation Challenge Fund, the Agence Nationale du Volontariat au Togo (ANVT) further studied the contribution of volunteers to the strengthening of the national health system by cross-referencing volunteer performance data with national indicators in this area.

The study addresses a general issue shared by all national volunteer infrastructures of assessing the real contribution of volunteers to the achievement of national objectives, which are aligned with the SDGs. More specifically, the study sought to identify the contribution of national volunteers to strengthening the health sector in Togo in order to achieve MDG 3 during the 2018-2019 biennium. To address the above-mentioned issue, the research team adopted a mixed methodological approach based on the collection of primary and secondary or administrative data from the Ministry of Health. The study sought to test the following three (3) hypotheses:

According to the data, during the years 2018 and 2019, ANVT mobilized for the benefit of 412 health facilities including 275 under the public administration and 129 from civil society, 218 national volunteers with nursing profiles and 194 midwives.

According to the study results, hypotheses 2 and 3 were confirmed, contrary to hypothesis 1. In fact, in the fight against malaria, the choice to reinforce the number of nurses by making national volunteers available in order to contribute to the reduction of mortality, particularly among children under 5 years of age, does not seem to be relevant under the current conditions. Despite their professional qualifications, volunteers work in a sub-sector that is determined by the government's ability to mobilize resources and make products available, and over which they have less control. Therefore, in order to have a significant impact on the reduction of malaria deaths, the ANVT will have to increase the number of volunteers assigned to the health districts and prefectures, taking into account the profiles of the personnel required. The effects of the volunteers' interventions have been positively noticed at the local and national levels.

Report
Activating the Role of Women in Volunteering
END_OF_DOCUMENT_TOKEN_TO_BE_REPLACED