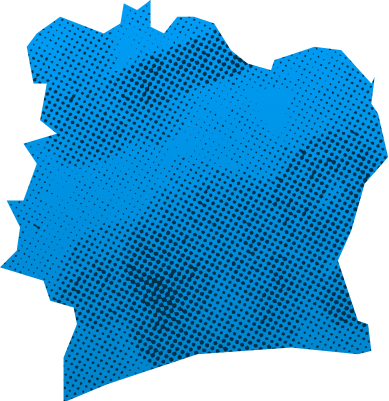 Civil society’s efforts to achieve the SDGs in accordance with the needs of its citizens have, in various cases, been supported by national and international volunteers working in Côte d’Ivoire. These volunteers mobilized within civil society organizations are working to provide appropriate, local responses to local development challenges such as poverty reduction, environmental protection, climate change, education and health. In recent years, the activities of these volunteers have become more structured with the creation of the National Volunteer Programme of Côte d’Ivoire (Programme National de Volontariat de Côte d’Ivoire – PNV-CI).

The Government has undertaken several measures regarding global citizenship education. These include: (i) the development of an educational guide on citizenship and the culture of peace under the Ivoiro-Burkinabe Treaty of Friendship and Cooperation; (ii) the establishment of the PNV-CI and the UNV programme; (iii) the opening of civic service centres in Bimbresso and Guedipo; (iv) the training of national competence volunteers and national civic engagement volunteers in the regions of Gbèkè, Tompki and the Autonomous District of Abidjan; (v) the authorization for implementing the Service Civique National Jeunes[National Youth Civic Service –SCN] pilot programme within the Regional Union of Cooperative Enterprises in the Savane region of Côte d’Ivoire (URESCO-CI), in Korhogo; and (vi) the organization of several awareness-raising sessions on civicism and the principles of citizenship in the country’s 31 regions.

Youth employment is a major challenge for the Government. In order to promote access to decent work opportunities for the active population, especially young people, efforts during 2017 focused on: (i) improving the institutional and legal framework of the employment sector; (ii) strengthening the operational capacity of youth support infrastructure; and (iii) integrating young people and promoting youth volunteerism, civicism and the principles of citizenship.

In addition, the activities carried out by French volunteers, as part of French overseas development initiatives undertaken in preparation for COP 21 and the recommendations that followed, should be highlighted. Today, these commitments translate on the ground to the importance of mobilizing French voluntary commitments for the climate in France and Côte d’Ivoire, in order to support leaders in their efforts to work closely with communities on developing community resilience. The protection of national parks and biodiversity resources falls under these commitments. From 2013 to date, more than 100 French international volunteers have been involved in efforts to protect biodiversity resources in western Côte d’Ivoire. The Taï national park is one such location. At the request of the World Chimpanzee Foundation, this UNESCO World Heritage site regularly receives local and international volunteers who dedicate their efforts to protecting the environment and biodiversity.

Recognizing that volunteerism can be a human and cross-cutting means of implementing the SDGs, Côte d’Ivoire (like other countries in the subregion) launched a National Volunteer Programme (the PNV-CI) in 2013. In 2014, the Government adopted the programme with a view to mobilizing all strata of society, especially young people, for civic participation in development activities to benefit
vulnerable populations and local communities. Attesting to this reality, in 2015 the United Nations General Assembly adopted a draft resolution entitled ‘Integrating volunteering into peace and development: the plan of action for the next decade and beyond’ to highlight the essential role that volunteers must play in achieving the SDGs set out in the 2030 Agenda. Resolution A/RES/73/140, entitled ‘Volunteering for the 2030 Agenda for Sustainable Development’, which recognizes volunteerism as “a powerful cross-cutting means of implementation of the 2030 Agenda” and of achieving the SDGs, was adopted in 2018. The PNV-CI is mobilizing young volunteers to support organizations in need of human resources for sectoral projects that are intended to benefit communities. It is supported by the United Nations Development Programme (UNDP) and UNV.

In general, it will be impossible to achieve the global goals without the ongoing participation of all strata of the population, at all stages and at all levels. As such, in the interests of promoting civic participation and the principle of inclusion, Côte d’Ivoire is “leaving no one behind” in the implementation of the PNV-CI. All young Ivorians, whether graduates or not, with or without qualifications, male or female, are involved in the programme through volunteering their skills (67 per cent) or civic engagement (33 per cent). At the end of 2018, 42 per cent of those involved were women. [...] In addition, various regions of the country benefit from the involvement of international volunteers – including those from France Volontairesand UNV – in development projects. [...] Like other volunteer organizations in Côte d’Ivoire, volunteers from the UNV programme have demonstrated a strong commitment to helping achieve the SDGs and have positioned themselves around a few specific goals, depending on their respective mandates. From 2016 to date, more than 400 international and national United Nations volunteers (agencies and peacekeeping missions combined) and about 750 international volunteers from France Volontaireshave been mobilized to help achieve the SDGs in Côte d’Ivoire. While the United Nations and the volunteers mobilized within its organizations have played a determining role in the return to peace and stability, for several years Côte d’Ivoire has also been receiving support from organizations promoting volunteerism in the context of human capital development.